Bet On The Blues

When Fred Chaplieer performs his tribute show on Saturday, November 7th, is it precise on the day 11 years since Peter Green was at the festival in Frederikshavn. 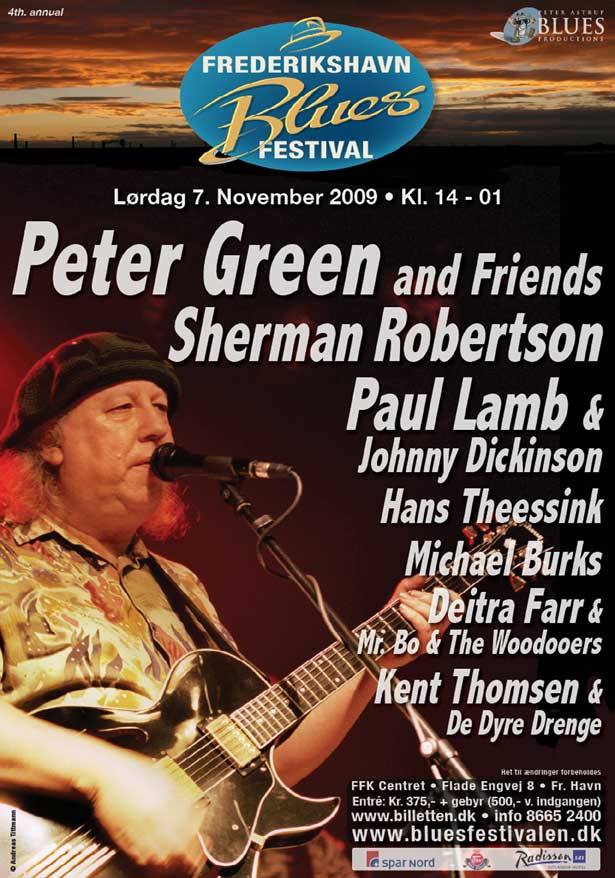 “Greeny” replaced Eric Clapton in 1966 in John Mayall’s Bluesbreakers. The following year he founded Fleetwood Mac, where he wrote evergreens such as »Black Magic Woman«, »Albatross« and »Need Your Love So Bad« In 1969, the band sold more albums than The Beatles and the Rolling Stones combined and Fleetwood Mac has sold over 100 million to date.

Monsieur Fred Chapellier draws French blues and has done so since he was named “Best Guitarist” in 2004. At the same time, he was named “Revelation Blues” at the French Blues Awards. Fred is a student of Fleetwood Mac founder Peter Green and will perform a tribute concert to “Greeny”, who died in July this year. Fred has released a total of 12 critically acclaimed albums since 2003.

After three years as drummer 1978 to 1980 and very very good rhythmic background, Fred works the guitar several hours a day in 1981. He tries to various musical styles but always returns to what he calls the basis: ”The Blues”, music he has always heard at home.

It was in the early 90s that he formed his first blues band “Kashmir”, with which he toured for 4 years. Then come the years “Men in Blue”, a group in which Fred shares vocals and guitar with a certain “Big Joe Barret”. Two 4-track CDs will be released in 1997 and 1998.

But Fred quickly feels cramped and wants to take back control of his own music. 1999, he decides to leave on his side to form his final group: “Fred Chapellier Blues Band”. He will record two albums “Blues Devil” released in 2003 under the label Mosaic Music and “the eye of the blues” in 2005. Albums on which we will find the excellent Johan Dalgaard (Johnny Hallyday, Bashung, Gaétan Roussel etc…). The brass are provided by Boney Fields (Lucky Peterson, Luther Allison…) and his section. Critics are more than positive, so much so that in 2004, on the occasion of the “France Blues Trophies”, Fred was named “blues revelation” and “best guitarist” of the year.

The same year, Fred Chapellier blues band became FRED CHAPELLIER for good. “Exit” the words “blues band”, because if Fred is indisputably influenced by this music, he is equally influenced by Soul and Rock. It is therefore with these three musical styles that he builds his own music. Fred continues to be talked about and, having become a professional musician since 1990, he will accompany, alongside his own group, various blues artists such: Don Ray Johnson, UP Wilson, Boney Fields, Buddy Whittington etc …

See all our artists here